Mad wanted ducks and frogs, chocolate cupcakes and white and a spoon for her birthday party. 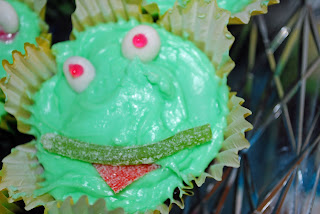 I admit these frog cupcakes are rather pitiful.  I found the best frog cupcake toppers, but Tom decided "we" should make these instead.  In the picture we'd found online, the green candy stayed in a smile.  Ours would hardly stay bent at all.  When I tried putting a very bent piece on one cupcake, it dragged the frosting down until the frog looked even more grim than the others.
Corey said these look less like frogs and more like green French people. Vohoho!
Oh, and what they lack in style, these cupcakes made up for in ability to stick to the paper.  I don't say I completely forgot to put oil in the batter.  I say I made fat free chocolate cupcakes. 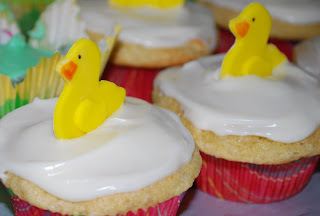 The same lady who made these perfect ducks was the maker of the frogs Tom said we shouldn't buy, because "we" could make our own.  (Our order was perfect and shipped a lot more quickly than I'd expected.  Not only that, but since we'd purchased the candy for the frogs at an overpriced mall candy shop, the cost savings for doing it ourselves was $3.) 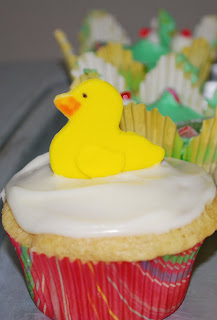 But I also found a blog that showed exactly what my ducks would look like, should we attempt such a feat.  I think the fact that the writer calls her sister-in-law's (I believe) effort "mutant rubber ducks" speaks to the horror.  You can check that out here. 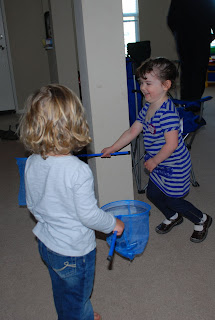 When the kids arrived, they hunted for butterflies.  The butterfly nets had one "catch" in it and the kids had to find the matching prey.  Good thing Grandma put the butterflies out and not me.  I envisioned them being spread high and low around a couple of rooms in our house.  She put them all in one tiny little section.  The kids are two, so easy finding and matching is different for them than for me.  Note to self.

This little lovely is still on the wall. 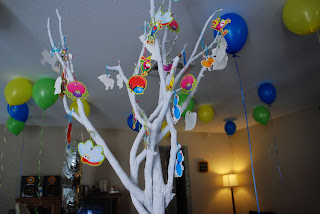 Critter tree.  For looks.  We are using it for Easter, too.  Just as you see here, only without the balloons.  It may also become our Cinco de Mayo tree.  Arribe! 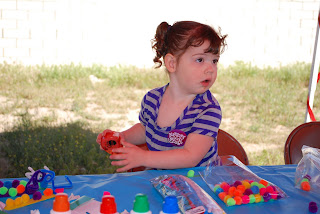 Making caterpillars in our weed-ridden backyard.  Check out those short sleeves.  It was a balmy 53 degrees in the sun.  With wind.  Jackets were brought out shortly after this. 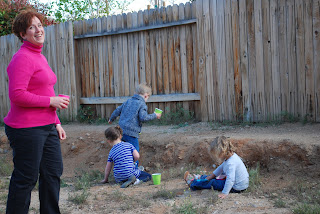 Lots of activities to do, but what's better than digging in cement-like clay? 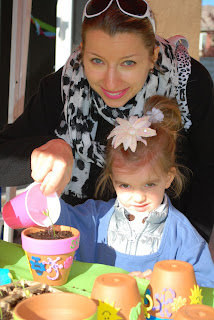 Each of the kids had a pot and a selection of veggies to choose from.  Samantha and her mother opted for an ambitious looking watermelon plant.  I am not kidding.  That's what she called it (the mother, not the child).  I love Valeria.  She's from the mommy group I was in when Mad was born.  We were the rare group that had nothing in common aside from our babies.  Valeria is from Belarus and a model.  Now she's working on her own clothing line.  I can be counted on to not wear makeup, accessories or, often, shoes and a bra.  Somehow we make it work.
Mad got some great gifts. Apparently people felt like they could help us furnish our barren abode house at the same time as they celebrated Mad's third birthday. She received a puppet theater and a table and chairs. 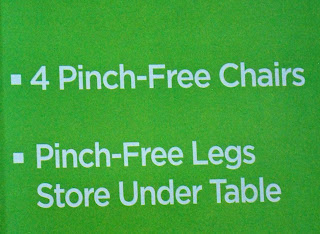 Safety is important.  We were all happy to read this on the box. 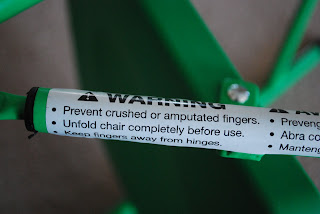 Not as happy to see this on each and every chair.  At least they won't pinch!
And now for the dramatic conclusion... 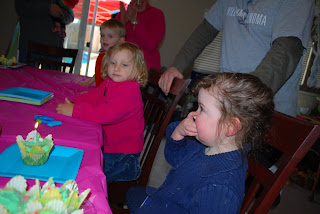 Right after this was taken, Mad seemed to have a seizure.  Thank god my mother-in-law was there.  Her nursing skills, speed and calm exterior helped us all cope a little better.
Yes, she's seen a doctor.  He said it could've been a seizure or she could have been holding her breath from all the excitement.  Waiting on a neurology referral.  Yes, that's a ridiculous thing to have to wait this long for.
"Written" by Shan at 4:14:00 PM

Oh, no! I'm so sorry that she had another seizure, or wait... didn't Fynn have a seizure too. Straighten me out.

But the party looks fabulous, I'm sure loved every minute of it. You are such a good mom making fat free cupcakes ;)

Fynn had a febrile seizure a couple of months ago. Those are strictly fever related. In Fall 2009 Mad had an EEG done due to a fall that knocked her unconscious. It showed electrical activity that could develop into a seizure disorder... or that she could grow out of. So you're right either way, sort of. Boo!

What a poopy way to end a great party! I hope everything is OK!

Sorry I am late checking in on this. I hope Mad is OK!!

My solution to the frog smiles would have been to thread pieces of wire through the candy. See? You are a better (and safer) mother than I am. BTW, I would have never thought to have avoided amputated fingers. Glad those chairs came with warnings.

But on a positive note, your pictures look fantastic!