Fynn's been talking a lot more lately.  She's even got a few phrases, her most commonly used being, "There it is!" and "What do?"  Mostly she sticks to single words to make her points.  A few of them sound entirely different than what she means.  This happens with every kid, I suppose.  Mad called water "wawoo" for about six months.  Maybe "wawoo" stuck around so long because we reinforced it.  It became part of our language and probably will always be around.  Same thing for Corey's once upon a time favorite question, "How that can be?!"

Many of Fynn's words are recognizable to strangers as she intends them.  But she has a few words that she means to say, but that could be misconstrued.  Some are a little embarrassing, like please, which comes out piss.

This morning around 4:15, Tom prepared to take Fynn to Grandma's house on his way to work.  She was raring to go! 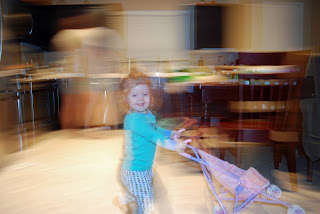 Madelyn and I stayed home for some Mama and Mad time.  I know that we've had at least one morning to ourselves since Fynn was born.  It was so long ago that I can't recall the details.  It's been too long.

We made cupcakes from scratch.  Mad was able to drag a chair over and get the white spatula all by herself.  (And thanks to those new pads I put on the chairs last night, it was a quiet event aside from Mad's gleeful sounds of independence.) 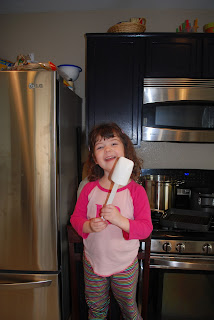 We made a small batch of cupcakes.  Half had vanilla frosting, the other half had root beer frosting.  The vanilla was delish, as always.  The root beer frosting tasted like root beer.  Great, if you like that sort of thing.  The cupcakes are in honor of Mardi Gras*, and they have appropriately colored sprinkles (purple, green and gold) on them.  And pink, because if you have one more color in the sprinkler, you've just got to use it, know what I mean?  One thing you can't tell is that each cupcake has chocolate kiss at the bottom.  It wasn't supposed to be the bottom, but those suckers sink.  And then the come out attached to the paper when you're done.  Kind of weird, but still better than baking a plastic baby in one.  Is it obvious I'm not from the south? 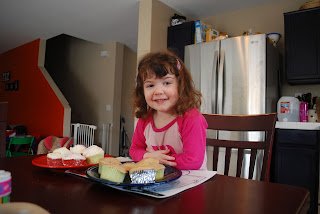 Next up?  Trying out the new brushes Mama scored yesterday at a local craft store that is closing so it can relocate about 10 miles farther away.  If you look closely, you'll see that Mad uses the blue brush for the blue paint, and the purple brush for the purple paint (and so on). 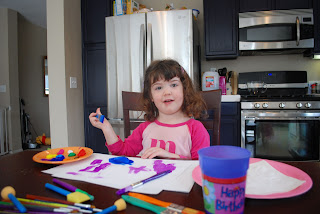 This pretty much sums up our day, aside from a few stories and trying out some new hair clips.  After lunch was nap.  As soon as I realized that I was spending the day at home with the good napper(!), I could hardly keep my eyes open.  We both slept great.  And then when she woke up in a cranky mood, we snuggled until it was better. 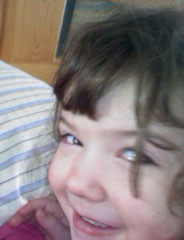 Not long after that, Daddy and Fynn came home and life went on like normal.


*I was selected to host a Zatarain's House Party.  It was on Saturday.  Everyone we were expecting to see ended up being sick.  So we made a few main dishes that night and have continued trying out recipes since then.
"Written" by Shan at 11:23:00 PM 3 comments:

It's Been One of Those Days

The kind with new friends, who come over to your house and make themselves at home.

When comments like, "I'm just randomly going through your stuff to find what I need," make perfect sense.

The kind of day when the roar of 11(!) kids from nine months to four years old and all those musical instruments you were so excited for your girls to have suddenly turns into background noise while you and five women hang out.

How is that memory peaceful even though it's only from a few hours ago?

It's been the kind of day where homemade heart cookies and frosting colored with beet juice made it all even sweeter.
"Written" by Shan at 8:36:00 PM No comments:

Email ThisBlogThis!Share to TwitterShare to FacebookShare to Pinterest
Labels: 'Cuz you got to have friends, cookies, mommy group, play date, Valentine's Day

This past holiday season I did more baking than in any three previous years combined.  More importantly, I've done more eating of said baked goods than normal.  (But, dude, chocolate chip macaroons?  Easy, fast and delicious before and after baking.)

So it was no surprise when I gained five pounds.

After enjoying myself through New Year's, I put the brakes on and began making some healthier choices.  Lost a couple pounds right away.

A week ago I weighed myself for the first time in maybe 10 days.  I was stunned, shocked and concerned to see that I had gained about 13 pounds.

I'll just admit that the idea of a tumor popped right up.  But let's be honest, that's kind of my first response to everything.  Missed my period right after Tom and I agreed we weren't having kids together?  Gotta be a tumor!

If the brakes had been put on before, the keys were now removed.

And I gained two more pounds by yesterday.

I mentioned the situation to Tom and Nance, but lightly, like, "Haha, no reason to be frightened, I know what I'd been eating.  I guess it just took a minute to catch up to me."

I started an exercise routine last night that kicked my butt.

Then this fantastic little kid of mine who can't seem to get passed the 23 pound mark stepped on the scale.  She weighed 40 pounds.  And her sister, who was very recently right on the cusp of 40 pounds?  Try 56.

I weighed myself at my dad's house this morning.  In full clothes, including jeans.  After breakfast.  On the first day of my period.  And I needed to use the restroom (every ounce counts, people!).  And I was still 15 pounds less than I had been only 90 minutes earlier at my home, naked.

I haven't gained weight.  In fact, in three days I can pretty much guarantee that I'll lose three to five pounds, which will put me right back to my pre-holiday number.

Came home tonight and stuck with my exercise plan, because it is still needed.  No longer secretly wondering if I'm going to die.  Openly feeling kind of stupid because now that the moment has passed, I am forced to recognize that my clothes still fit the same and that the scale had been kind of wonky lately.