When Madelyn was a wee bebe, I had some difficulties sharing food with her.  It wasn't an issue with Corey.  I don't know why exactly.

Okay, I have some theories:
*I was extremely stressed by Mad's start in life.  It blindsided me and affected how I made decisions for several months.
*When Corey was a toddler, I gained about 35 pounds on the "toddler diet."  That's the one where Mama makes a meal for herself and the kidlet, eats hers and finishes his.  Brilliant.

I've been much more relaxed about sharing food and drink (I pretty much only drink water when we're together) with Fynnie.  Still not eating hers, but totally fine letting her share mine.

I have this really cute water bottle that is clear with a periwinkle lid.  (Periwinkle was the color at my wedding, people... this stuff is important!)  It is with me almost constantly.

Did you know that light shines through a clear plastic bottle with a periwinkle lid?

Fricken slo-mo science video reel before my very eyes.
"Written" by Shan at 5:55:00 AM 2 comments:

This is the post I almost believed I'd never write.

Sorry I've been getting so far behind on reading blogs.  I have been busy.  Making friends.  Smiling.  Laughing.  Planning.  Happy.

That mommy group I could never meet up with for activities?

I've been meeting.  I've been active.

In the past three weeks I have:

Learned to make and can jalapeno jelly and strawberry jam.  Turns out it's so much easier than I would have guessed.  And fun.

Ordered tutus from one of mommies for the girls for Fynnie's birthday party.  Mad's will be pink, yellow and purple.  Here's a (blurry) picture of Fynnie's that I snagged.

The blue piece in the center above the bow is a flower for her hair.

Taken a belly dancing class.  There was another one this morning, but I couldn't make it.  I'll catch the next one.  It was fun and a good workout.  Made even better by the fact that I had Fynnie strapped to my body during the whole thing.  Madelyn?  She was busy playing with the other kids or running over to try out our moves.  Oh!  And remember that one miserable trip to the breastfeeding support group when Fynnie was a couple weeks old?  Remember the mama who gave me the blow-by-blow of the last 11 weeks of her pregnancy, labor, delivery, recovery and the status of her relationships with the medical staff at the hospital where all this happened? She was there.  She's been my Facebook friend for a few weeks, but I didn't know until she walked in and started talking.  And talking.  She struck me as nervous (I don't think any of us had met before, except for me and the host... who'd been at the canning party).  I think that 11 months ago she must have really been (understandably) traumatized by the circumstances of her daughter's entree.  And I have to say that I kind of like her.

Supported a mom's endeavors to avoid having her son selling discount cards at the grocery store.  I bought four of them and, along with all the discounts, was thrilled to get a 20 minute photo shoot for my girls.

The girls and I met again with the photographer mama and her girls.  At the mall.  For pretzels and lemonade and to get my CD of photos, but we hung out for almost an hour.  We may start getting together to walk in the mornings.

Applied to host a couple of young women from China for about two and a half weeks.  I think we're in.  They arrive on the second.

Tomorrow I'm hosting a canning "party" of my own.  All I did last time was cut up some strawberries and jalapenos and then fill up and label a few jars.  Neither of the women who are coming tomorrow were at the last event, so I'll be the "knowledgeable" person.  Bahaha!  One of the ladies who is coming is the same one we were able to help out a month or so ago.  The other one is just coming because she's interested.

I've still been going to the gym regularly with my pal, Jennifer.  I did miss two weeks because we were fighting off sinusitis.  Yuck.

And aside from all of the fun and frivolity, there have also been trips with the girls to the local farmer's market and the farmer's market from a neighboring town.  Tom and I took Mad to a cooking class the other night (more on that later).  We're getting out more.  And "out" no longer means just the grocery store or the park.
Tom, Madelyn and I painted that orange wall.  It looks great.  Tom's very happy.  Making such a bold statement started off as just following through on one of our "some day" conversations.  But as the girls and I went to choose the paint, it occurred to me:  Making this dramatic change is akin to transforming our house into a home, something that stalled out a couple of months after we moved in.  (It has also led to a discovery:  If one paints a wall, the first thing one does is stand back and appreciate the new color.  The second is to notice that the other side of the wall really needs to be painted, too.   Still no decisions regarding the niche, but we'll get there.  Maybe I'll ask the ladies tomorrow what they think.)

Oh, what's that?  You want to see pictures from the photo shoot?  Did you think I'd pass up a chance to share my sweet girls?  Feel free to check out the rest of the pictures here. 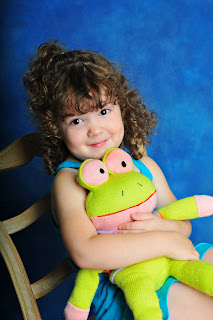 Mad and Other New Frog 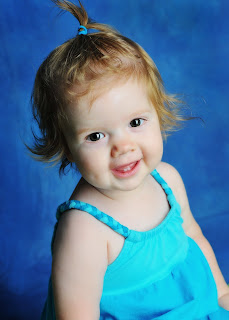 Fynnie Fynn getting ready to crawl away 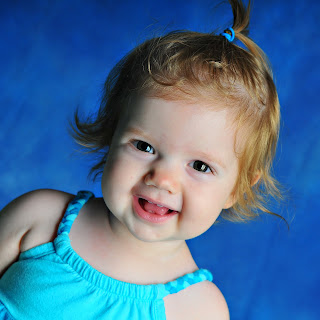 Could she be any cuter?  No, but does anyone else see that look in her eyes?  The one that says, "Hey, I wonder what your shoulder tastes like!  Mama's tastes great and she makes this awesome sound every time I bite her.  Will you make a sound? 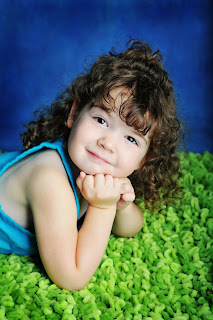 Doesn't she look sweet?  Our photographer friend is amazing.  This shot was taken while Mad was doing the most hilarious slo-mo roll around the floor, arms and legs up in the air.  It reminded me of some old SNL episodes with Molly Shannon.
"Written" by Shan at 2:13:00 AM 8 comments:

News of My World

Doesn't involve any hacking, sneaking or listening in on other people's conversations.  But there's a lot to share!

We are feeling increasingly more pleased with our decision to switch to Kaiser.  We met the girls' pediatrician last week and Mad's neurologist today. Every medical professional we've encountered greets us and then tells us why we're there.  Because they've read our file.  Doc walked in this morning and said, "So you're here about the incident in April."

Yes, that was my jaw hitting the floor.

Moreover, he really listened to what we were saying.  We discussed Mad's fall in 2009.  Unlike the neuro we met back then, at no time did our new doc try to insist that Mad had a seizure and then fell.  He listened.  We laid out everything.

Two women in Tom's family have a history of seizures.  Teen onset, lasting through early adulthood.

Mad fell.  Knocked herself out.  Came to.  Went out again.  Had an EEG that showed some minor activity that our old ped, Dr. Present, said could result in a seizure disorder later or could be nothing.

At the birthday party in April, Mad was extremely excited.  By the singing.  Her first candle to blow out.  The frog cupcake.  The ice cream that she was eating way too fast.

She seemed to have a brain freeze followed by a seizure.  But she came to and was her normal self (albeit upset) in a matter of seconds.

What did all of that mean to our new neurologist?

Apparently some people are susceptible to vasovagal episodes.  And do you know what can cause them?  I am not joking when I say being excited and eating something cold.

Yes, that was me breathing a huge sigh of relief.

Fortunately, Doc is going to redo the EEG to be on the safe side.  Again unlike the previous neuro, New Doc does not advocate using heavy duty meds to prevent something that may or may not happen.  So if it turns out she is at risk for developing seizures, we will wait to treat them if they show up.

He said Mad seems perfect.  Developmentally appropriate.  Smart.  Pretty (he did say that, but not as part of his diagnosis).

So next up will be an EEG.  Unlike two years ago, Mad isn't likely to fall asleep anywhere we put her (not that she did then), so she'll probably have to be put under for it.  That's our least favorite part of the whole thing, but we'll take it to get the answers we need.
"Written" by Shan at 12:31:00 AM 8 comments:

I need help.  And yes, I realize there are so many places you could take that.  All the same, I lay myself bare.

Or, I admit that our walls are still mostly bare 28 months after moving in here.

For the past three months or so I've been working my (obviously weak) magic, trying to get Tom in the mood.  To hang stuff.  Because we have plenty of stuff.

Artwork that my mother-in-law got for us.

Scenic photos from vacations past.

Pictures of the kids.

And it turns out we even have frames.  Tons of them.  Or at least one-quarter of a ton based on the four trips down the stairs with my arms full of slipping and sliding framery.

Now that Tom has agreed to join me in my quest to make this house feel more like a home, I have decided that we need to paint one of the walls.

Don't worry, we've got the color mostly under control.  Crazy as this may sound, we have an orange in mind that will go brilliantly with the tan walls and purple cabinets in the kitchen.

No, really.  That's not the part I need help with.

In addition to this one wall, which is in the living room, we're going to paint a niche in the same room.

How would you paint the niche?

Paint it all, back and sides?

Paint just the back?

Paint the back our fabulous orange, but paint the sides a color lighter than the rest of the walls... to sort of frame it like a window?

Something else that you're willing to share with me?

In case you're not sure what the heck I'm talking about, here's our niche.  It's approximately 4' x 2'.

To the head of a large motor company in the midst of a big business event:  "Thank you (for fixing my collar).  I changed my shirt twice on the way over here tonight."  Like that wasn't enough, I had to expand on it.  "I wore this shirt to work today, but changed as I was heading over here.  Then I realized I'd popped a button off and had to go through it all again."

To a very serious request for suggestions for volunteer activities for foreign exchange students on the local mommy group board:  "I suppose it would be inappropriate to suggest that the students volunteer to put sprinklers in my backyard, right? How 'bout a patio cover? Playing with my kids so I can get something done around here?  Seriously though, I hope you find what you need. I would love to host, but the spare bed we have is a sleeper sofa in the loft. I've already seen my father-in-law in his underwear this year and can't risk any more trauma."
"Written" by Shan at 10:48:00 PM 4 comments: